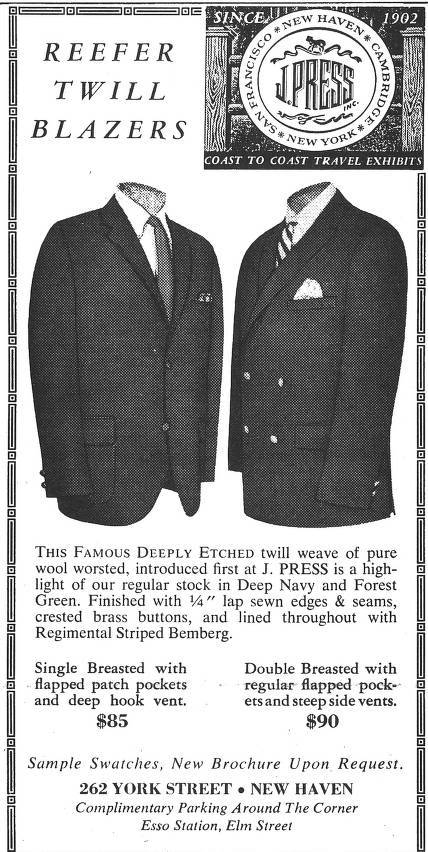 We continue our exploration of the double-breasted jacket’s place in the Ivy genre with these recollections from King Richard XLIV.

The best-selling blazer in J. Press history was gathered by its roots from Aunt Florence.

Irving Press’s spouse was a lady who lunched at the fringes of La Cote Basque and other spots alongside Babe Paley, the Duchess d’Uzes, and other paradigms of ’60s New York Society. The reefer twill luncheon suit she wore on several occasions prompted a suggestion of versatiltiy she imparted to her husband: her suit might just be just the right material to make into a men’s blazer. Irving retrieved a swatch of the cloth from the dressmaker for Seymour Landsman, a principal at Linett, prime clothing provider to both Chipp and J. Press. “Get a hold of this material,” he commanded Landsman, “make it into a blazer, and confine it to J. Press.”

Adhering to the times, J. Press got high in the ’60s on Reefer Twill (the catalog image above is from 1969). The maritime history of the fabric was peacoat British, but the version J. Press devised featured distinctly rough-hewn, steep-ribbed twill, a startling departure from the soft hand of the flannel blazer classic. My personal favorite was a double-breasted forest green that flaunted two rows of Dartmouth buttons, but the preference of most Squeeze customers was the traditional single-breasted in navy.

Double-breasted suits and blazers at J. Press were tailored in the natural-shoulder style of our three-button model that departed from the single breasted version only via deep side vents. Reefer twill blazers were lined throughout in strident regimental striped Bemberg. Double-breasted suits and blazers never gained more than 10% advocacy at J. Press, but allowed us a response to detractors who called us stodgy and unbending.

In 1962, J. Press even attempted a foray into womenswear in our newly enlarged downstairs quarters on Forty-Fourth Street. The effort achieved scant success and quietly disappeared the following year.

Six degrees of separation, the merchandising and design savvy of a woman, the boss’s wife,  inspired the greatest J. Press hit of the decade. — RICHARD PRESS

35 Comments on "Golden Years: Getting High On Reefer Twill"