In New York, when you pop in somewhere to use the restroom you never know what serendipity awaits. I don’t mean in the restroom itself, but the establishment you’re in. You might run into an old acquaintance, or make a new one.

In my case recently, I’d popped into Bloomingdale’s and while exiting the men’s room saw a strangely compelling sportcoat on a mannequin. First thing that caught my eye were the patch pockets (three of them no less, or rather three of them = too much). Then I noticed the three-button stance set off by an especially handsome lapel roll. Of course there were darts, but when I looked at the back expecting to see double vents, I actually found only one.

Was it a mannequin that had strayed far from the Ralph Lauren section? No, it was a Harris Tweed for the Bloomingdales house brand, priced at $750 and made in Canada, as I recall.

I sought them out in the store and was further surprised at what I found: a collection of half a dozen that may very well appeal to the trad dresser who takes his inspiration from before the heyday. The heavy, fantastic tweeds came in three fabrics in the above-mentioned version, plus three more in a belted-back version reminiscent of the ’30s. 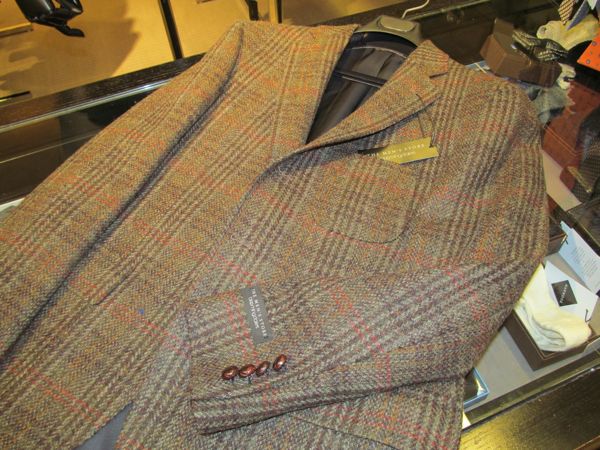 Fit was a bit of a challenge for me. A 40 was too tapered and restricted movement. A 42 was too big in the shoulders, but provided a relaxed silhouette I liked. With the structured and slightly squared though not excessively padded shoulders, I got a circa 1949 Joe College vibe from the jacket.

The Harris Tweeds are not available on the Bloomingdale’s website, alas, so you’ll have to check your local store. — CC