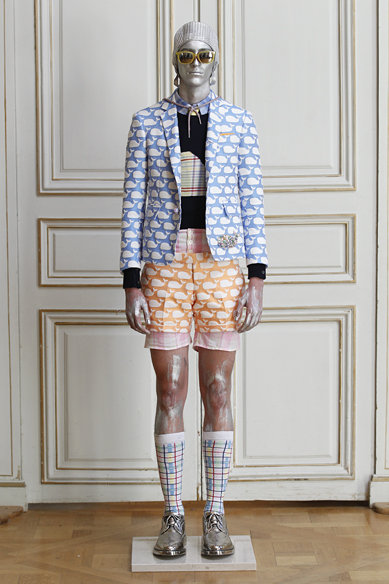 As “Take Ivy” and countless other photographic documents reveal, jackets were worn on the short side in the declining twilight of the Ivy heyday.

But the short jacket’s current hold on the marketplace has all the earmarks of a fashion trend we’ll be laughing at years from now, the same way we laugh at the giant lapels of the ’70s, the big shoulder pads of the ’80s, and pretty much everything from the ’90s.

The photo at left is from Thom Browne’s Spring 2013 collection. The outermost item adorning the model’s torso bears marked similarities to a conventional sport coat, including lapels and a vent, even if its length more closely resembles that of a vest.

And so it is under the inspiration of this image that Ivy-Style.com declares open a contest to see if a reader can produce a photo of a shorter jacket.

Historically jacket lengths have varied, though most experts advise that they reach the finger knuckles. Trendy jackets have lately climbed north of the wrist, are now at the forearm, and, as all fashion ends in excess, will likely reach the elbow by the fall of 2014.

Here’s how to play:

1) Use the leave-comment feature to paste a link to a photo of a short jacket that has appeared on the Internet.

2) The jacket should be from an American brand and be at least tangentially related to neo-prep or traditional American clothing, to be determined by the judges of Ivy-Style.com.

3) The jacket can either be from a brand or worn by an individual who in the parallel universe known as conventional taste, for example, would normally take a 42 XL, but as a fashion victim acting in staunch defiance of sartorial logic, not to mention the sense of proportion bequeathed to Western Civilization by ancient Greece, has opted to wear a 42 (or more likely a 40) XS.

4) The posting of the image must verifiably date from the calendar year 2013, which is another way of saying it should be current.

5) The jacket must be intended to be a suit jacket or sportcoat, with lapels and breast pocket and other distinguishing features including sleeves, which are conspicuously absent from some of Browne’s jackets  (at least it eliminates the need to choose the number of cuff buttons). Sweater-jackets and lapeled windbreakers, should such things exist, do not count.

6) Finally, server jackets and boleros are also disqualified from entry.

The contest will close at a time as yet to be determined. The winner will receive his choice of a belt donated by the newly launched preppy belt brand Asher Riley, because, hey, what goes better with a short jacket than a stylish belt? — CC