The much anticipated Todd Snyder x LL Bean capsule collection was released this month, pairing an award-winning American designer with an iconic brand whose name is synonymous with traditional, American-made quality. Like Snyder’s past collaborations with heritage brands such as Thomas Mason and Alden Shoes, the TS x LLB collection reinterprets the classics with slimmer silhouettes, bold colors, and a considerable branding increase.

Overall, the collection left me conflicted.

As Ivy Style readers know, LL Bean itself needs little branding, and the Maine Hunting Boot is emblematic enough without knitting the image into a sweater and unexpectedly pairing it with pleated khakis. Some of the brighter colorways remind me of helping my mother fill out the catalog order form in the early nineties, when a traffic cone orange or electric teal anorak was the surest protection against being hit by a car while playing on a snowbank. That jacket lasted me through elementary school, and I’m less confident that the collection’s Scenic Print Puffer Jacket would do the same. 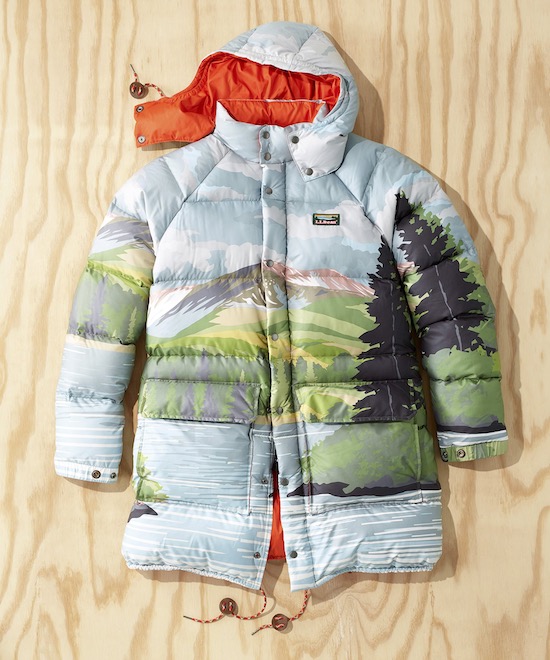 Other products like the birds’-eye Norwegian knit are a reasonably sedate variation on the white-on-navy original. Despite their description quoting “The Official Preppy Handbook,” I wouldn’t recommend dirtying the shoulders with gatoring as the merino/cashmere blend will not stand up as well as the original lambswool/nylon blend. Unlike the Made in Norway Heritage sweater on the LL Bean site, this new version joins their ranks of Imported products with an additional $20 markup. The few made-in-Maine holdouts include boat tote and boots, and these are peppered throughout the collection page on Snyder’s site.

These are familiar comforts amongst the more Supreme-inspired clothing, and I wouldn’t bother to grumble into the wind about production origin if the New England Maple Syrup listing hadn’t stuck into my eye. Yes, style evolves and quality corners are cut, but ordering syrup ambiguously “tapped in New England” and only “bottled in Vermont” direct instead of deigning to pick up a local bottle at Whole Foods is a pronounced symbol of what irked me about the collection. Though drawn to some of the simpler new designs, the neo-prep sensibility of this collaboration has a hollow, hypebeast quality that curtails the authentic experience of wearing LL Bean for the street cred.

Hashtag jockey though I am, one should remember that even the glossiest images fade, if not from use, then from saturation of the next twenty trends that pile on from the next exclusive collaboration. Menswear is swiftly catching up with womenswear in this regard, and as a fan of vintage clothing it would be a shame to see a men’s pile of low-quality discards as mammoth as the women’s in my local thrift store. Although the Todd Snyder x LL Bean collection hasn’t quite released Fair Isle crop tops under the legendary brand’s name yet, traditional menswear might want to brace itself for the years to come. — ZG BURNETT