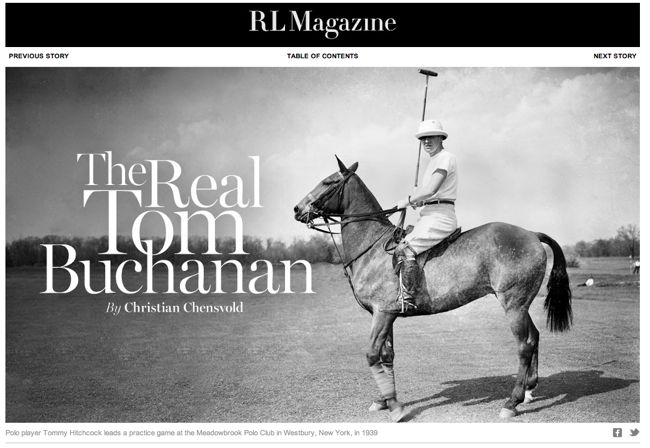 We kick off a series of Gatsby posts with a piece I did for Ralph Lauren Magazine on Tommy Hitchcock, who served Fitzgerald as the model for Tom Buchanan.

My primary text for the article was the lone Hitchcock biography by Nelson Aldrich, Jr., who, in addition to writing the book “Old Money,” penned the 1979 Atlantic Monthly cover story on preppies we presented here a few years ago.

Back at home and lauded a war hero, Hitchcock enrolled at Harvard and spent time at Oxford before devoting himself to polo. With his home fields at the Meadow Brook Club in Westbury, he was the right man at the right time, dominating his era as Bill Tilden did in tennis and Bobby Jones did in golf. “Dressed for polo in shining boots and white breeches,” [writes Sarah Ballard in Sports Illustrated], “with a camel hair coat thrown over his muscular shoulders, Hitchcock appeared clothed where other men looked costumed.”

Head over here for the full story on the real American hero who, transformed in the imagination of F. Scott Fitzgerald, became a bigoted, selfish jerk. — CHRISTIAN CHENSVOLD

29 Comments on "The Real Tom Buchanan: CC On Tommy Hitchcock For RL Magazine"