We’ve been covering the underworld lately, with con men, spies, the CIA, and now a private eye.

This year marks the 60th anniversary of “Peter Gunn,” who was a new kind of TV detective when he made his debut in 1958. With his neat hair and simple gray suits, Gunn could have fit right in on Madison Avenue (or “The Dick Van Dyke Show”). I’m not sure if that makes him hip or square — from our perspective, that magical hybrid of both, I think — but he definitely favored hip music. The character’s local watering hole featured jazz musicians also all but indistinguishable from Madison Avenue types.

In honor of the anniversary, the Wall Street Journal has a fine write-up:

Sixty years ago this month, “Peter Gunn” began airing on NBC, reinventing the private detective as a clean-cut, stoic hero. Unlike previous TV gumshoes, Gunn was virtuous and understated—cast as a hatless young executive rather than a rumpled and morally flawed investigator running down facts.

But Gunn was more than that: He was TV’s contribution to postwar cool, a relatively new aesthetic that slipped into the mainstream through America’s jazz subculture. Cool was unemotional and solitary, a dry energy that emanated from introspection and attitude rather than from conceit and swagger.

By the late 1950s, cool had already begun to penetrate several corners of popular culture. Cool could be found in the sound of Miles Davis’s trumpet, Jack Kerouac’s unconventional prose and the quiet confidence of “damaged” movie characters played by Humphrey Bogart, Robert Mitchum, Lauren Bacall and Lizabeth Scott. In all these cases, cool meant elegant minimalism and detachment from conformity and the status quo.

Gunn was created by a young Blake Edwards, right around the time he directed “Breakfast At Tiffany’s.” Check out the story here.

Also by way of news roundup is a piece several readers sent me. It’s an Atlantic piece called “How did athleisure take over American fashion?” and features an expert source that will be familiar to serious Ivy buffs. Fashion historian Deirdre Clemente, who penned an early piece for Ivy Style, says that athleisure is the natural culmination of a casualization trend that began well over a hundred years ago:

To Clemente, the athleisure story doesn’t begin in the late 20th century, with the birth of Lululemon. It begins in the late 19th century, a sort of Cambrian Explosion moment for basic fashion when sports changed the way young people dressed—both on the field and in the classroom. In other words, when I asked Clemente to explain the sudden rise of athleisure, my request was one word too long. There is nothing sudden about the influence of sports on the way Americans dress. In fact, it is hardly an exaggeration to say that all modern fashion is athleisure.

… Around the same time as the invention of the rubber sole, intramural sports took off at American universities, Clemente told me. That meant more young men playing tennis, golf, polo, and croquet. But lacking the means or inclination to fill their wardrobe with non-sports clothes, many of these men simply kept their athletic attire on for class. Athleisure dropped the prefix and became, simply, leisure.

There’s much more about the evolution of trad staples such as polo shirts and sweaters, so check it out.

It all means, of course, that we who carry the torch of Ivy-prep are complicit in the decline of dress standards, accessories to the crime. Looks like slippery slopes are a lot more slippery than we thought. — CC

16 Comments on "Gunn Control: You’re Under Arrest For Promoting Athleisure" 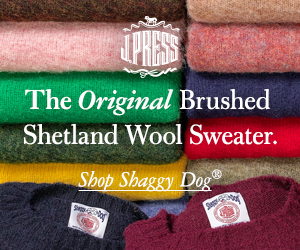