While fruitlessly searching for no-show socks at the downtown Boston Macy’s Monday, I stepped into a time portal. Or at least I felt that I had. There, hanging from a rack in the store’s little Polo Ralph Lauren section, was a genuine article from Rugby Ralph Lauren. And another beside it, and another beside that…

Could the brand have decided to liquidate the very last of its Rugby backlog in an obscure corner of Macy’s? I checked the tags of the first item that had caught my eye—a green multi-stripe rugby with a grey hood and oversized skull logo—and saw a modern Polo Ralph Lauren price tag. Same thing with a black polo shirt featuring a striped chevron and Gothic letters, which looked identical to something I’d once pined after in my college days at the Rugby store on Newbury Street.

When Rugby got the axe in 2013, it was claimed that the design’s spirit would still exist within Polo. Was that finally happening now, five years later?

On a visit to the still-existent Ralph Lauren store on Newbury Street the next day I spied similar-looking merchandise, like a bold patchwork rugby shirt and an oxford-rugby hybrid marked by a skull and a Gothic “P” hanging above a counter. I expressed my admiration, adding a remark about how similar it was to Rugby. A saleswoman replied that that was the intent, and said that Boston was one of the stores selected to stock the merchandise based on local nostalgia for the shuttered brand.

She went on to tell me it was part of a new collection called Boathouse, which debuted on the RL website a few days ago. I noticed the crossed oars in many of the styles, such as the aforementioned patchwork rugby and a black knit rowing blazer. The admittedly aggressive graphics of the clothing won’t be everyone’s cup of tea, and much is too bold for my tastes, as much as I admire them (this cricket blazer that appears to be part of the collection is another matter). But it does remind me of Rugby at its early best, before too many logos took over, and I look forward to seeing what else Boathouse leads to. — ERIC TWARDZIK

Like this post and want to read more, more often? Help Ivy Style reach its goal of 1,000 true fans. 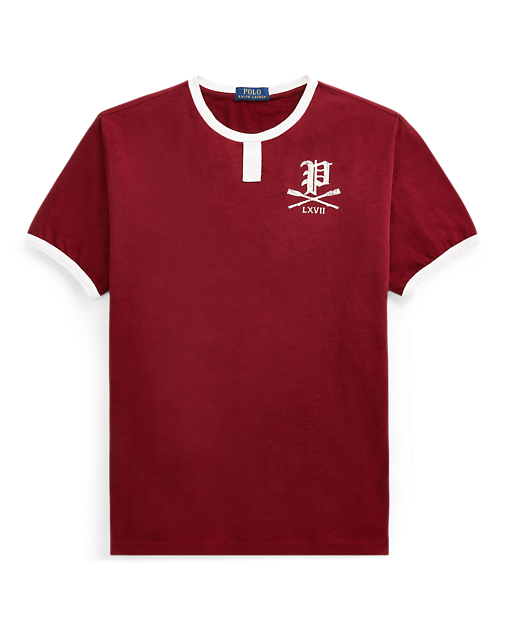