Our last post looked at a Main Street clothier during the Ivy heyday. Today we revisit an historic piece on the brand that started it all, and spread its look from Madison Avenue to Main Streets across the US. This document, originally posted in summer of 2013, helped cement 1954 as the starting date of the Ivy heyday here at Ivy-Style.com.

Recently on Ivy Style’s Facebook page a reader posted an article by Julien Dedman entitled “That Brooks Brothers Look.” A quick investigation revealed that the article comes from the February, 1954 issue of Playboy, and that Dedman had graduated from Yale in 1948.

I’ve argued several times for the year 1967 as an end of the heyday, and I think we may now have a strong candidate for the beginning. Nineteen-fifty-four is the same year LIFE Magazine published its “Ivy Look Heads Across US” story. The Ivy League Look must have been new enough to warrant these mass media stories, but not popular enough to feel like old news.

The article includes the above illustration from Shepherd Mead’s book “How To Succeed In Business Without Really Trying,” which Playboy had modified to show that all the items should be sourced at Brooks Brothers. Scans of the full article, which is a bit difficult to read, can be seen on our Facebook page (scroll down to the entry from July 13).

Dedman opens his essay by noting the rising popularity of the Brooks look:

It seems that “The Brooks Brothers Look” has broken out of the cracked-leather-and-brass-tacked confines of the Yale, Harvard and Princeton clubs and is spreading like the oak blight to yonder hinterlands, lending its polished luster to — horrors — the lesser breeds.

It’s a look, he says, that has been a part of select East Coast communities for generations:

Without it, for instance, you are branded a Bolshevik in most eastern universities, an untouchable in Boston and New York societies, a plain damned fool in the financial salons of Wall Street.

With tongue no doubt planted in cheek, Dedman says that Brooks is more than a look, it’s a veritable religion. Or at least a religious commandment, as in “Thou shalt not wear anything else”:

It is a way of life. You are initiated into its ancient and honorable cult when you enter Hotchkiss, Andover, Exeter, Groton, or any other of the fashionable eastern prep schools.

Though I’ve argued that much of the Ivy League Look comes down to styling as much as ingredients, and that the campus was the primary influence on the styling, Dedman gives credit for the look directly to Brooks, calling everyone else imitators:

Your father takes you  (as his father did before him) to Brooks Brothers, or to one of its multifarious imitators, and you are transformed — presto chango — into a “man who belongs.” You emerge wearing a suit with no shoulder padding, a straight-hanging (not fitted through the waist, please) three-button coat with narrow, notched lapels, pleatless trousers narrowed through the knees to a neat eighteen-inch cuff. The piece de resistance consists of a selection of white, buttondown collar, Oxford-weave shirts embellished by several silk repp English regimental striped ties.

While the clothes can be bought off the shelf, proper footwear requires an investment of time:

Shoes pose a problem. The Brooks Brothers Look demands old shoes of very good leather (preferably slightly cracked) and polished to a high sheen. New shoes are déclassé. The answer to this is to buy a new pair of shoes and wear them furtively until they are properly aged, or else buy them at a second-hand store.

Also as explored in my “rise and fall” essay, the two worlds most associated with this look are the worlds of finance and the campus. After previously invoking “the financial salons of Wall Street,” Dedman again returns to the world of prep schoolers:

Thusly clad you can enter any prep school you please and rest assured that nobody will find you different from anyone else.

Mixed among encomium for Brooks and its singular contribution to American culture is this passage, which today reads as irony:

Brooks Brothers… sits dauntless and unperturbed… a citadel of conservatism, unmoved by the vagaries and vicissitudes of male fashion. In this fickle world of change, one can always count on Brooks Brothers to remain faithful to its style. It will go on ad infinitum clinging jealously, tenaciously, to its tried-and-true measurements…

After the lengthy discussion of Brooks and its original customer base, Dedman finally addresses the look’s rising popularity:

Nightclub comedians, TV crooners [and] bandleaders have dipped into the Ivy League Pandora’s Box of fashion and emerged with crew cuts, horn-rimmed glasses, and that BB Look. It used to be you could tell a Yale, Harvard, or Princeton grad four blocks down Madison Avenue. Now you aren’t sure. It could be the alto saxophonist of Guy Lombardo’s band.

After that, there’s nothing left but decry the barbarians at the gate. “How the hell can I preserver the aura of distinction that shrouds any wearer of a BB suit,” Dedman writes, “when every Tom, Dick and Harry in America is wearing a shabby imitation?”

I assume Julien Dedman is no longer with us, but I hope he lived long enough to see what the barbarians at the gate looked like when the Ivy popularity he so gently mocks had ended. I’d enjoy reading his take on that.

In 1958, however, he did turn his wit to his alma mater.  — CHRISTIAN CHENSVOLD 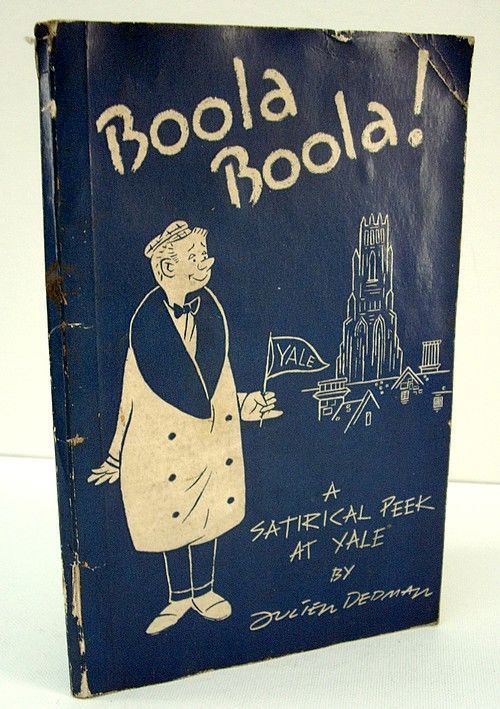 39 Comments on "From Wall Street To Main Street: That Brooks Brothers Look, 1954"