Despite our latest storm detaining some attendees, the MFIT’s “Ivy Style” symposium went off with a bang. Presenters included co-authors of the accompanying book; Patricia Mears gave an overview of how the exhibit came about and Bruce Boyer talked about the jazz musicians who took up the Ivy look in the ’50s and ’60s.

Deirdre Clemente gave an especially engaging presentation about clothes and social life at the Ancient Eight and Seven Sisters. Clemente had contributed to Ivy-Style.com three years ago and it was a pleasure to finally meet her in person. Her forthcoming book outlines how college kids throughout the 20th century created the whole concept of dressing down.

It was also a pleasure to finally meet London lass Rebecca Tuite, who is in New York doing a doctorate. She’s written several pieces for Ivy Style and has two books coming out on Seven Sisters and Vassar style:

There were book signings for the authors of the MFIT book, as well as for Daniel Cappello, who talked about the history of the Ivy League and the characteristics of each campus. Jeffrey Banks and Doria de la Chappelle also presented and signed copies of their book “Preppy: Cultivating Ivy Style.”

Below, Richard Press signs for a young Yalie:

Speaking of Chipp, Paul Winston was there and was interviewed by Bruce Boyer on stage (I took some video of it and may post later if it came out OK). Here’s me chatting with Paul in a photo from The Daily Prep:

This old gent is so old school he only shops at J. Press at the source: New Haven. Never the New York store: 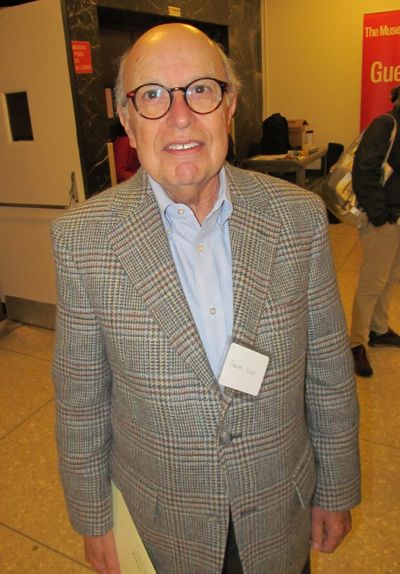 Here’s Dustin Grainger from the blog Maximinimus (flanked by comment-leaver “Sartre”), who presented along with John Tinseth of The Trad and a very entertaining Clark Aldrich from The Daily Prep, who combined a hobbyist’s nonchalance with a crusader’s mission to save civilization:

Claudio Del Vecchio, CEO of Brooks Brothers, talked about the brand’s history, its hits and misses in merchandising, and the battles to both win back core customers lost during the Marks & Spencer years as well as capture a new generation of customers. If I understood him correctly, at once point he said, “I love Ivy, but it’s not the reason why we’re there.” You guys can chew on that.

Bruce, me and Richard signing books. Shortly thereafter, Mory’s comes up in conversation and Richard and I break into an a cappella version of “The Whiffenpoof Song.” Too fun. — CC

12 Comments on "The Ivy Style Symposium"