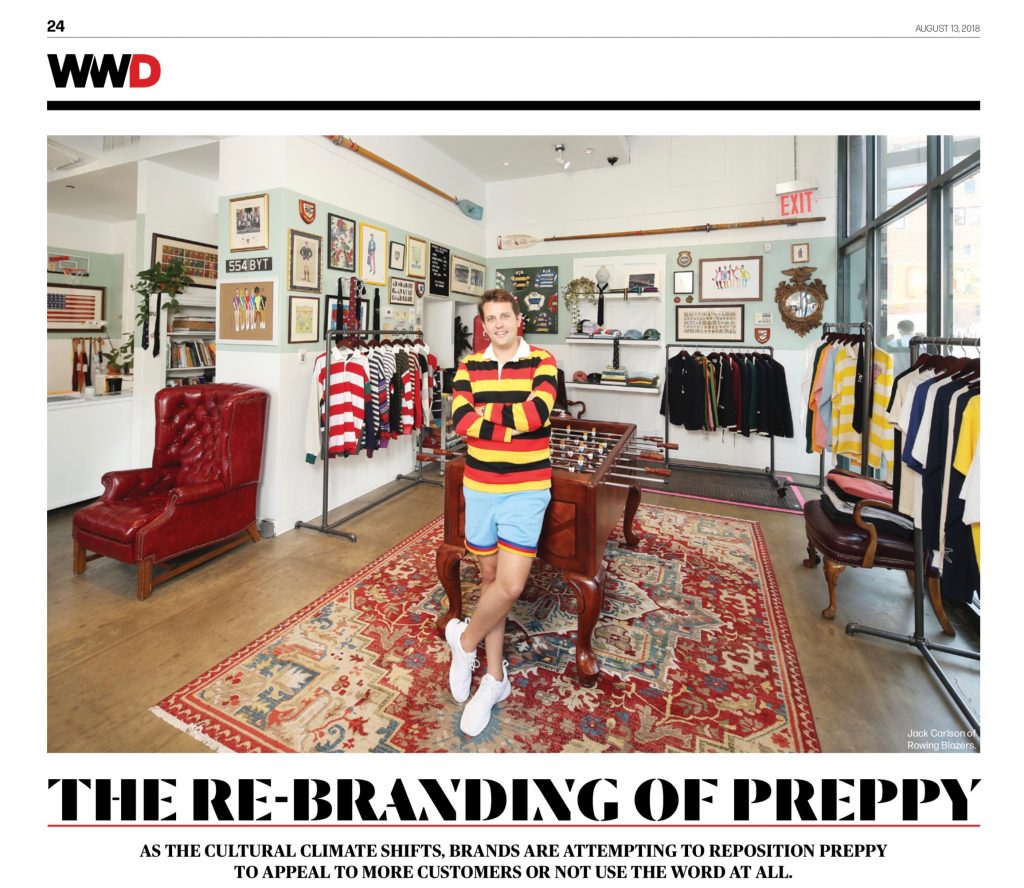 As hinted in our last post, we continue with an examination of the rising revival of neo-prep. It comes to us from the trade publication Women’s Wear Daily, which absorbed the menswear publication DNR several years ago. Recently I spent a fun but exhausting near hour speaking with a reporter from WWD, and last Monday the story came out. It’s entitled “The Rebranding Of Preppy: As the cultural climate shifts, brands are attempting to reposition preppy to appeal to more customers or not use the word at all.”

The story is pegged on the Rowing Blazers brand, recently founded by Jack Carlson (disclaimer: friend and advertiser). Jack is certainly doing more than his fair share of giving prep-inspired classics fashion appeal, garnering a ton of press (of which this is just the latest), forging all sorts of collaborations, and hosting regular shindigs at his summer pop-up shop here in New York.

The story is locked behind a WWD paywall, and the reporter sent me a PDF, requesting that I only share snippets. Fortunately someone has pasted and posted the story, which lets us off the hook.

The story opens with the same orthodox-vs-fashion opposition that emerged in the comments section of our last post, which featured Sperry’s “Prep For All” campaign from earlier this year.

One sunny afternoon a gentleman in his late 40s walked into ‘ New York pop-up on Rivington Street. He asked the brand’s founder, Jack Carlson, to join him next door for ice cream at Morgenstern’s, where he proceeded to offer Carlson unsolicited advice about his line. The man was a Princeton graduate, preppy and pleased with the brightly colored rowing blazers and rugby shirts Carlson designed, but didn’t like the T-shirts he created with .

“He said something like, ‘They have no place in the brand,’” recalled Carlson, who is 31. “I was polite, but in my mind I was thinking it’s my brand and if I think it’s cool, then it makes sense. There are people who don’t quite get it, but you never hear any of these comments from younger people.”

I spent a lot of time with the reporter talking about my assessment of words and their meanings, and how they change over time. “Preppy” had become so watered down over the decades, I said, that it’s no surprise that the word “trad” caught on in the digital era. The Sperry video seems to illustrate this very point: prep diluted to a point where one wonders why the term is even invoked at all. Sperry is quoted in the article with the following:

“We aren’t denying that we are preppy, but we wanted to open the boundaries and let people know it’s OK to interpret preppy in your own individual way,” said Kate Minner, Sperry’s chief marketing office. “The customer doesn’t want to be told what to do.”

J. Press also snags a mention in the story, voicing its intention to get back to basics rather than fashion-dilute the style even further:

The company recently brought on Robert Squillaro, who previously worked at , to streamline the brand as senior vice president and chief merchandising officer. According to Squillaro, the J. Press customer is underserved and looking for classic, American sportswear and tailored pieces that most companies have stopped making — with the exception of The Andover Shop located in Harvard Square in Boston, which is seeking new ownership, or O’Connell’s Clothing in Buffalo, N.Y.

Instead of trying to chase a wider audience — J. Press is privately held by Onward Kashiyama USA and operates three stores — the brand is getting back to the basics with a print catalogue and its flagship at the Yale Club in New York City, which Squillaro said has increased business significantly. But the company remains keen to attract a younger consumer, which it plans to do with a more fashion-forward line to make its debut this fall with slimmer fits that will accompany its classic heritage assortment. The lines will be distinguished by tag colors. Squillaro also hinted at a collaboration with a designer to be released later in the year.

My long chat yielded all of one quote, which is completely understandable as the story’s focus is clearly on other matters (remember, I do this for a living, too). And our notoriously curmudgeonly commentariat grabs a dubious passage as well:

But preppy purists — those of them who are left and who live in the comments section of sites like Ivy Style — aren’t ond of the interpretations. Under a post on Ivy Style about the opening of Rowing Blazer’s temporary Grand Street store, one commenter, who identified himself as Christopher Hosford, stated: “Fashion aside, I am inherently prejudiced against clothing that purports to identify a wearer as a prep or university varsity athlete, when indeed he was no such a thing.…The glowering fellow with the shades and regatta patch — he probably hadn’t seen a body of water bigger than a Crown Heights mud puddle nor rowed across one — is a particularly risible example.”

“I think the purists feel left out,” said the founder of Ivy Style, Christian Chensvold, when asked about the current state of preppy apparel. “For my readers who have grown up on a brand like Brooks Brothers, they believe what’s happened to it is an utter travesty and a complete dismantling of the greatest men’s wear institution in our history.”

In the digital age, it would seem fashion cycles have gotten shorter and faster. Just five years ago we wondered about the uncertain future of neo-prep. We may be getting our answer. — CC

31 Comments on "WWD On The Rebranding Of Preppy, With Quotes By And From Ivy Style"