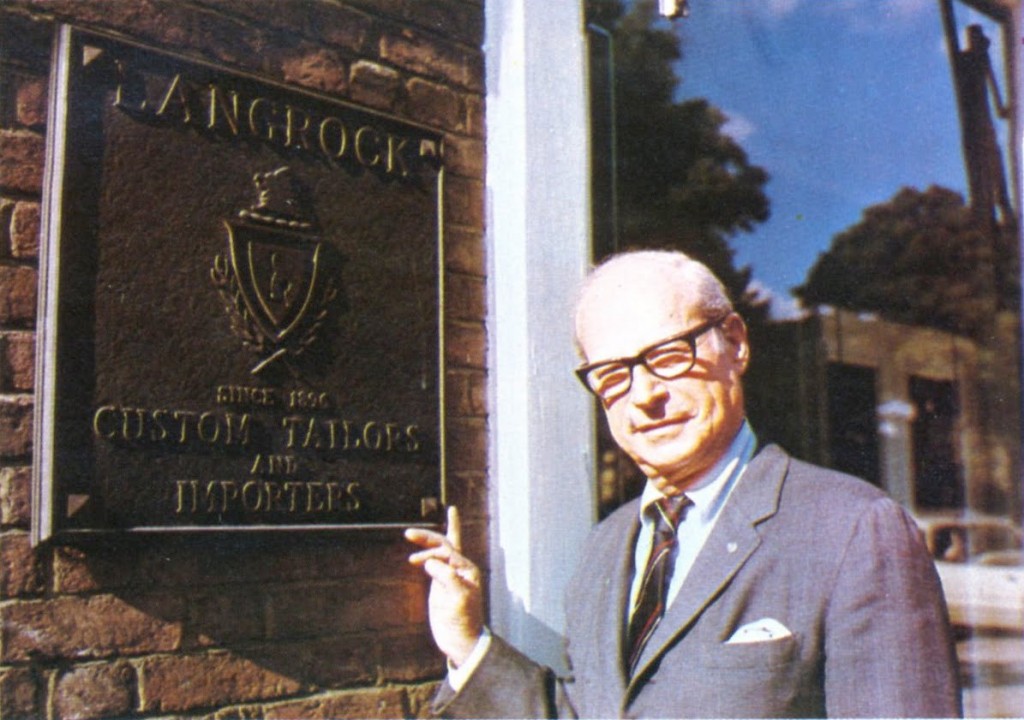 In a 1973 issue of the Princeton Alumni Weekly, Richard K. Rein wrote about P-Town’s legendary clothing shop Langrock. “Princeton’s oldest and most successful men’s clothing store,” he wrote, “is a curious mix of effete snobbery, highbrow intellectualism, and small town warmth and personal service that remained singularly unruffled by the sweeping sartorial changes occurring about it.”

A decade earlier the shop across the street from Holder Hall dominated the local prep and undergraduate market. So prevalent were student shoppers that they were banned on Saturdays so businessman could shop in peace. But by 1973 undergrads were scarce. Campus fashion had changed and Langrock’s prices had become too high for many student budgets  The least expensive item in the shop was $4.50 socks, and that quickly escalated to $325 for the base model made-to-measure wool suit, and $750 for the self-indulgent luxury of the muskrat-lined alpaca overcoat. Langrock, however, was still serving its original clients, who came of age before bellbottoms. It had a staff of 30, including 12 tailors, and was conducting a brisk mail-order business. In fact, it was doing $1 million in annual sales.

Behind it all was owner Alan G. Frank. He was born in New York in 1912, and it was in Manhattan that he was introduced to the textile industry. He moved to California in 1930 and worked in aircraft manufacturing during World War II. His postwar attention turned again to the east and clothing when in 1948 he became an investor in Langrock, the family business of his wife Joan. Frank came to Princeton in 1952, taking over management of the Nassau Street store. He would move his family from Hamden, Connecticut, in 1954, becoming a permanent resident of Princeton. Langrock would continue to be a fixture on Nassau Street, albeit in different locations, for 31 more years before downsizing and moving into the Princeton University store in November of 1985.

The last Nassau street location was at Number 16, and Frank in part blamed his longtime nemesis — parking problems — for his move into the U. It also appears that Don Broderick, manager of the university store, made the veteran retailer a financial offer he could not refuse. The student newspaper states that Broderick bought the rights to the Langrock name. Broderick pointed out that Langrock was a corporation and that Frank was still an owner. What the arrangement was is not exactly clear, but what was certain was that Frank was to remain the face of Langrock.

Langrock operated out of a 10 by 14 foot section of the second floor of the U store for 10 years. Frank’s atelier was decorated with antiques and vintage furnishing from Langrock. During those years the Langrock shop would offer special orders, custom and made-to-measure clothing, along with shirts, ties, braces, pajamas, underwear, and formal shirts and accessories. Frank closed his shop and retired to Naples, Florida, in September 1995. He died February 21, 1996, at the age of 83.

Frank was a member of the Nassau Club and the Springdale Golf Club. During his merchant years he was actively involved in community affairs, which included Rotary and Chamber of Commerce, where he was president for three years in the ’60s, the Princeton Borough Merchant Association, and the mayors Economic Development Committee. A survey of the Town Topics newspaper is full of grainy photos of Frank presenting checks to worthy causes and awards to notable community members, plus photos of himself being recognized for his community affairs work. He said he was “blessed to have been able to do things for other people. I was taught this way by my father and grandfather, who both said you won’t be happy unless you do things for others.”

Tom Brophy of Lawrence Township penned a eulogy that ran in Town Topics on February 28, 1996. Brophy had worked for Frank as a teenager in the ’50s and continued to be mentored by him. “He was a man of enormous energy, tremendous marketing insight,” he wrote, “and made ever customer feel important. He was a beautiful man and role model. His idea of dressing down was long plaid pants (always cuffed) a dress shirt with an ascot, a sports coat and his black tasseled loafers.”

In a recent post on his blog, Nick Hilton paints a portrait of Frank as a Man of La Mancha sadly diminished in his decling years. Mr. Frank would have seen it differently. Richard Rein bore witness to Frank’s philosophy. “Perhaps the undergraduate body is a source of potential customers,” he recounted. “But in order to meet their current price potential, we would have to lower our standard of quality, which is something we won’t do.”

Frank had no regrets for not compromising on quality, nor for stubbornly adhering to the house style, nor for having less than a half a year of retirement under the Florida sun before departing this earth. Indeed “no regrets” sounds like his personal motto. Alan Frank was erudite enough to give it to you in Latin, but it may be best expressed in the appreciation of the customers he served for 43 years and the town he loved. To them he may truly have been the Paladin of Princeton. — CHRISTOPHER SHARP

29 Comments on "Unruffled By Change: The Story Of Langrock Owner Alan Frank"