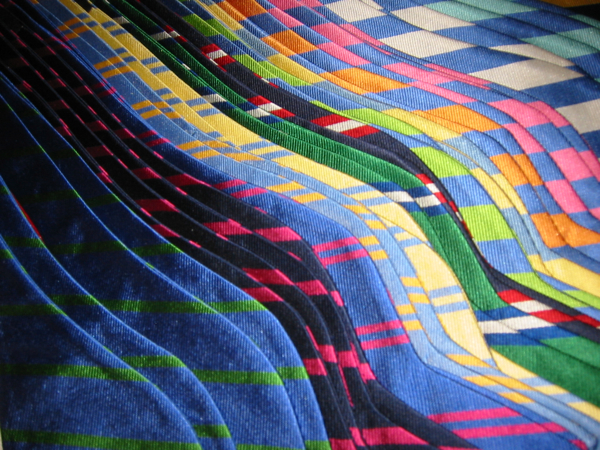 It’s Menswear Market Week here in New York, and I’ve spent the past few days at a couple of the trade shows. First up, Designer Forum, sponsored by the Custom Tailors & Designers Association, the oldest trade organization in the US.

Pictured above are rep bow ties from Collared Greens, which has combined the preppy, domestic manufacturing, and eco trends all into one. Based in Sun Valley, Idaho, the brand showed neckties and brightly colored, organic-cotton polo shirts.

Next up, patch-madras shorts in a nice hefty fabric from Castaway Clothing, the wholesale arm of Murray’s Toggery Shop of Nantucket Island. 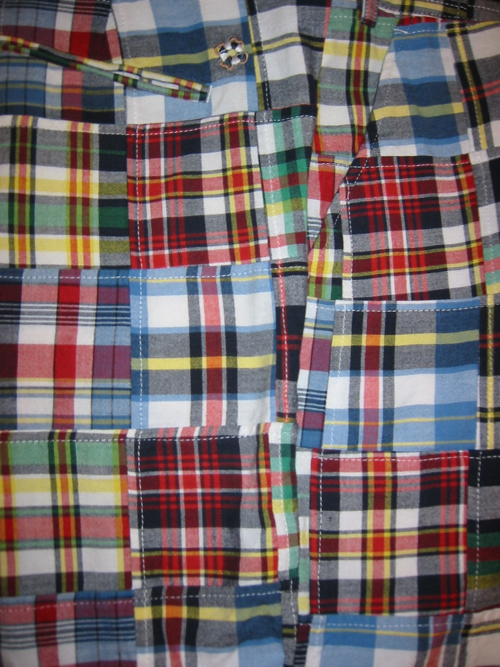 The New England Shirt Company was founded six months ago, though its Fall River, MA shirt factory has been around for 80 years making shirts for J. Press, Sero and others. Below is an oxford sport shirt with patch pocket and contrast stitching. Price range for the collection is $125-$175.

Necktie maker Atkinsons Royal Irish Poplin was there, a longtime staple of many regional trad shops. “Poplin” today is mostly used to describe cotton suits, and yet the term is actually a conjunction of “papal linen.” To further confuse matters, Atkinsons’ ties — which are about the finest you’ve ever felt — are actually made of silk and wool. Below is Atkinsons sales rep Hal Choyce, with seersucker sack jacket and rakish collar roll: 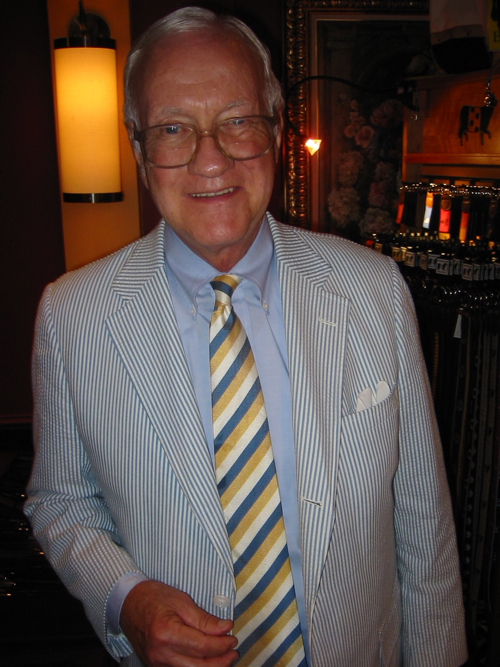 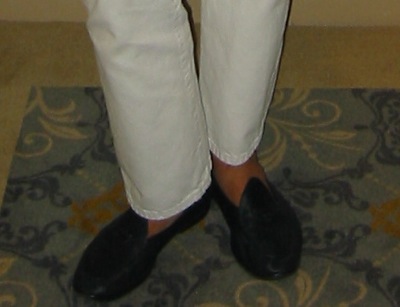 Come on, I did. It’s Sid Mashburn, who was wearing one of his signature looks: white Levis 501s, loafers (Belgian Shoes, in this case), no socks of course, and a natural-shouldered Italian sportcoat. “Tell me if this isn’t the most comfortable thing you’ve ever worn,” he said, putting it on me. He wasn’t kidding.

Sid didn’t want to be photographed without a necktie, but consented anyway. He’ll be glad to know the shot didn’t come out, so I cropped it at his shins. He made white jeans and loafers without socks look so cool I ordered some Levis as soon as I got home. Of course, what it reminded me of is the guy in white chinos/jeans in this widely circulated shot from the LIFE archives.

I asked Sid how a regional shop in Atlanta started getting such sudden buzz among the myopic New York fashion media. “My wife used to work at CondeNast,” he confessed. Yep, that explains it.

Then Bruce Boyer wandered over, along with former DNR reporter Vicki Vasilopoulos, who’s currently making a documentary on Italian tailoring, and business cards start getting exchanged — and compared. Mashburn and Boyer find they’ve used the same shade of green, whose number on the color wheel they’ve got memorized. So I make a crack about that scene in “American Psycho” where the guys compare business cards. Boyer doesn’t know the scene, but comes back with, “But I’m in the book.”

The rest of us float incredulous looks. “What do you mean you’re in the book?”

“There are two pages of me,” Bruce says. “The character says, ‘Look, here’s what Bruce Boyer says in Town & Country….’ I was going to write Bret Easton Ellis a note saying, ‘What’s a nice guy like me doing in a book like that?””

Anyway, it was pretty much the snappiest comeback ever. “Seen the movie?” “No, but I’m in the book.” Touché, Monsieur Boyer.

The following day I went to the Capsule show. As it was hot, and held at a funky industrial space in Chelsea, instead of the Warwick Hotel, I felt no obligation to wear long pants. I was clad in khaki shorts, Weejuns, and this patch-madras shirt from Brooks, accessorized with Clubmasters and this skinny belt from J. Crew. I had barely walked in the door when a guy grabs me and says, “You’ve been dressing like this all your life, haven’t you?”

“Because you look so natural. Most of the guys I’ve seen doing that look are trying way too hard.”

Nice compliment, but to put it in context, here’s who it came from: 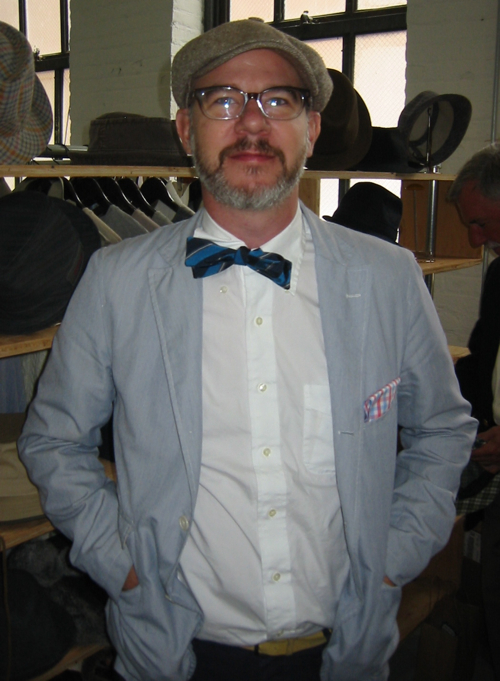 Lawrence from Sartorially Inclined was there, doing some live blogging. A great guy with a much deeper voice than you’d expect from a fashion blogger with a category called “lusting after“: 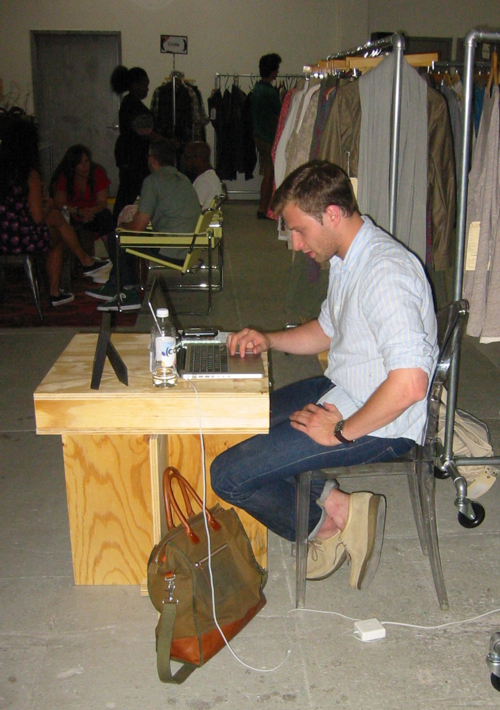 Sebago showed lots of work boots, including several reproductions from its original 1946 catalog: 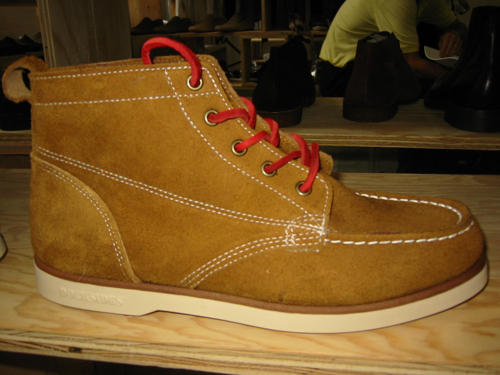 Next spring the Eastland Shoe Company will bring out these fine Maine-made penny loafers, priced at $250: 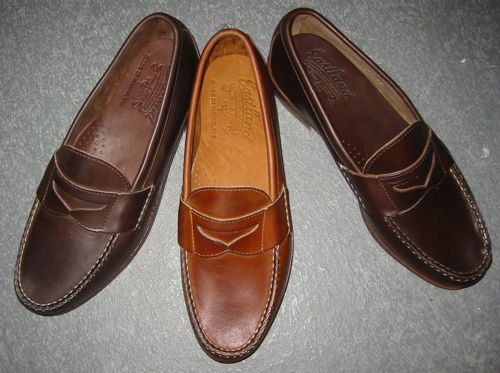 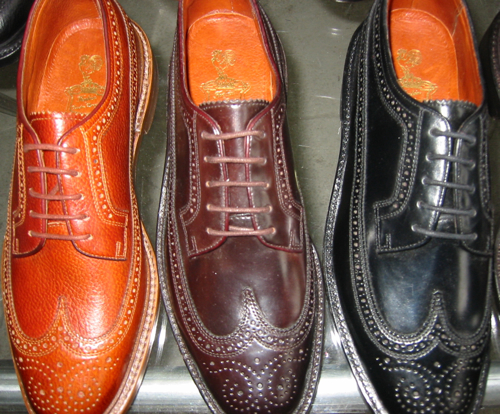 One more remark on shoes: Mark McNairy was there with his Bass collection (see below), and said he’d like to open a shoe store in the near future. In the meantime, his long-tailed oxford shirts ($120-$190) are made in the Brooks Brothers factory. “A dream come true,” said the avid collector of vintage Brooks shirts.

Finally, we have a patch-pocketed, chambray half-lined herringbone jacket by Billy Reid. If you’re not sure exactly where Billy Reid fits in the marketplace, you’re not alone. “It’s like a Banana Republic designer stumbled into a J. Crew meeting,” someone quipped, “and fell asleep halfway through.” — CC