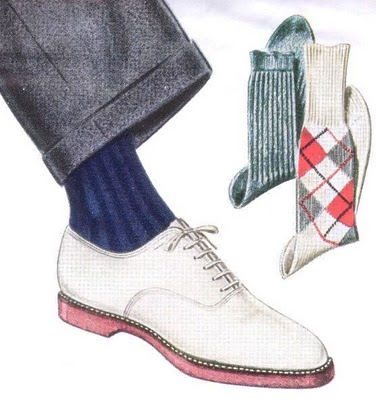 May is here and with it the season of white bucks, the Ivy wardrobe item that lent its name to the term “white shoe,” usually applied to a law or financial firm that hired WASPy guys from elite universities and catered to an Old Money clientele.

In 1997, language expert William Safire wrote an essay in the New York Times on the origins of the term white shoe:

The source is white ”bucks,” the casual, carefully scuffed buckskin shoes with red rubber soles and heels worn by generations of college men at Ivy League schools. Many of these kids, supposedly never changing their beloved footgear, went on to become masters of the universe on Wall Street and in the best-known law firms.

In its early days, the adjective was used in an envious, resentful way by those with less-privileged backgrounds; now it is either a dispassionate description of elitism or a passionate derogation of old-fogeyism. However, some of the nouveau-riche derogators of the old-line firms are classed by a different and more expensive shoe, the loafer with a brass link ornament made by the Gucci firm in Italy. In Washington, K Street, where many lobbyists make their headquarters, is known as ”Gucci Gulch.”

I was tempted to put “white-shoe” on our journalese blacklist, but I’ll hold off, and just file it under frozen terms. There isn’t a great replacement for it. The term used to hint at WASPishness, the kind of place that didn’t promote Jews, but times have thankfully changed. Still, the term wraps up not just prestigious professional-service and financial firms, but big, old, east-coast and fairly traditional ones. It’s faster to write “white-shoe” than “big, old, east-coast and fairly traditional.” So despite the fact that you’re more likely to see casual-Friday khakis than a white pair of shoes on a man at a white-shoe firm, we’ll give “white shoe” a pass.

In “Franny and Zooey,” JD Salinger has a character speak this line, which Salinger wrote in 1957:

“Phooey, I say, on all white-shoe college boys who edit their campus literary magazines. Give me an honest con man any day.”

For more on how the term “shoe” was used during the heyday, see this piece.  — CC