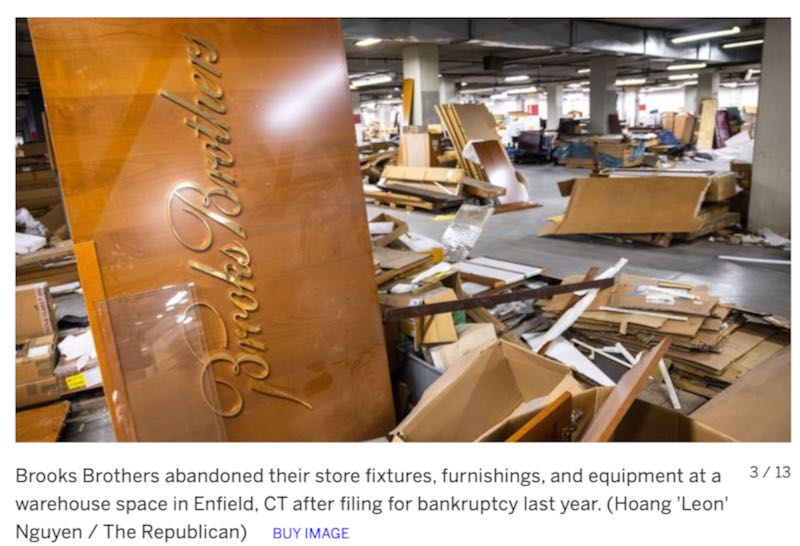 Yesterday I realized that Brooks Brothers is gone and it gave me a real sadness.

A year ago this weekend, on a sunny day much like today, I took one of my nephews into Brooks Brothers and showed him around. I told him that one day I would buy him something there, when he was grown up, just like I had done once for his big brother. This was just a few days before the pandemic hysteria hit and the store shut down. It re-opened last summer, but I had not been in there until yesterday, when I was walking by the store by coincidence and saw a sign on the street for 25 percent off. I went in and the entire store had been re-arranged. Suits, shirts, and ties were pushed to the back of the store and kept to a minimum section. Up front and spread all around were sweatpants, t-shirts, and some other frivolous wear. Where once I saw distinguished salesmen in nice clothes, this time I was greeted by a teenager wearing an untucked polo shirt over a long-sleeved t-shirt and immediately noticed that his fingernails were painted black.

I asked him if the blazers still would be on sale tomorrow at 50 percent off, and he initially did not seem to know what a blazer was. Look, I love sweatshirts and t-shirts and shorts because I use them every day when I exercise, but they don’t belong in such a prominent place at Brooks Brothers. I don’t know if I can ever take my nephew back there. I still may go back there this week and get a made-in-the-USA tie and a buttondown shirt, but I’m not sure I can ever rely on it to fill out my wardrobe like I used to.

J. Crew used to be next door to Brooks Brothers, but it shut down a year ago, before the pandemic, and never came back. Around the corner was a great Johnston & Murphy store, but it left in a dispute with the landlord in the shopping center, which is now in bankruptcy.

The last year has been such a waste, but maybe it just hastened what was already on the way.  So sad. — CG

Screenshot via Masslive.com’s report on the Brooks Brothers abandoned warehouse in Enfield, CT.

18 Comments on "Paint It Black"