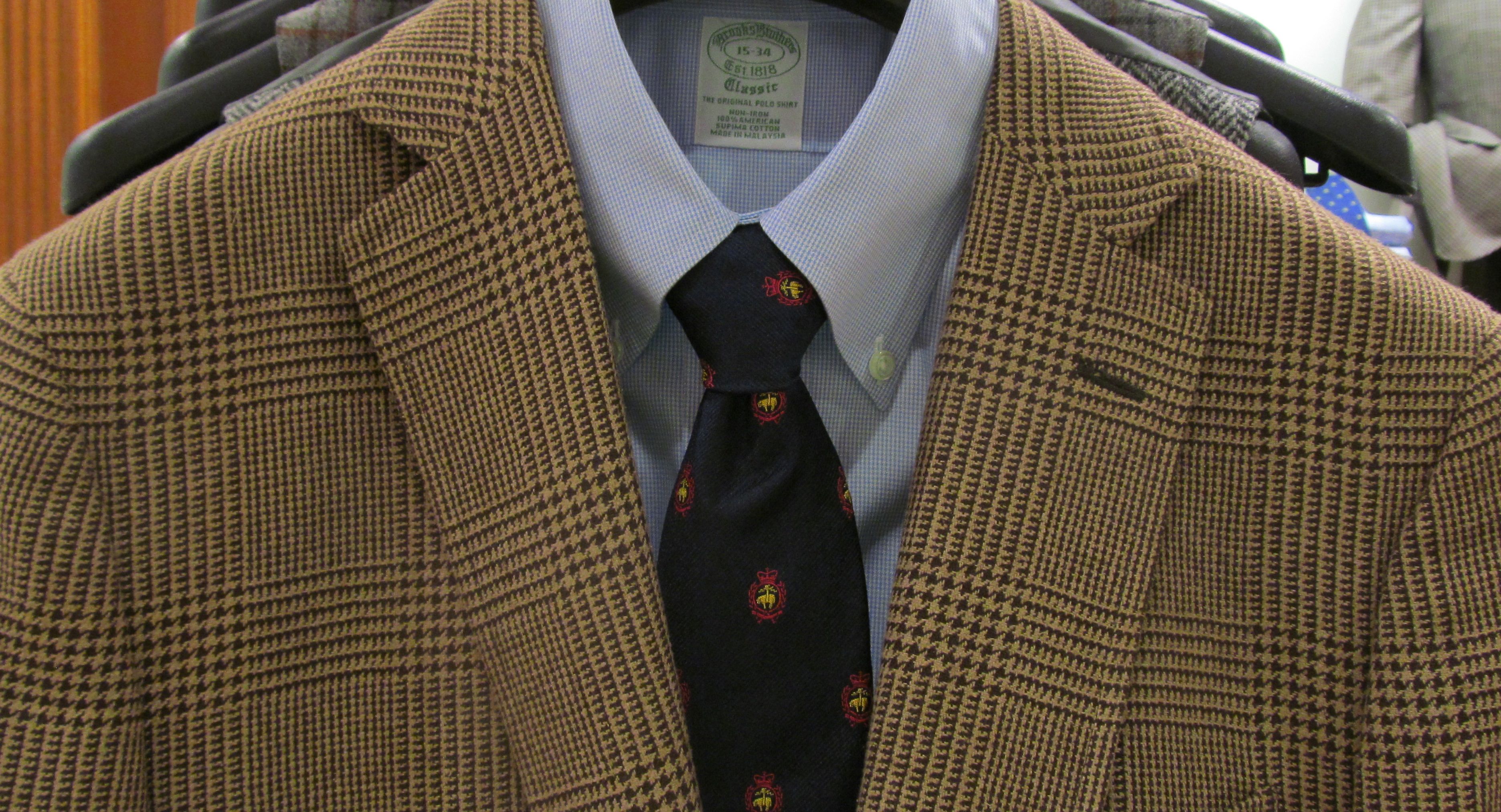 The other day I was browsing at Brooks and went to try on a brown herringbone vest. I needed to see how it would look when paired with a patterned tweed jacket, like one I have at home, so I went to the sportcoat rack and grabbed something at random.

What it was I had never seen before.

Turns out Brooks has brought out several jackets in its various fits (Fitzgerald, Regent, etc.) that come with a hang tag explaining that they are a “super soft jacket with natural shoulders and a relaxed but trim silhouette.” They come in lightweight fabrics, are unlined, and have basically nothing in the shoulder. I’ve always liked the Fitzgerald fit as it comes with a three-inch lapel, which is one of my requirements, and a pretty great shoulder. Well I tried on three of these soft-tailored jackets and thought they were fantastic. Prices and country of origin varied; there was one from China and one from Thailand priced in the $450 range, and they didn’t quite drape as well. But the $800 Italian-made one pictured here fit like a dream. I don’t like unstructured slack jackets, and this doesn’t go quite that far, but it’s definitely significantly more comfortable than the average sportcoat. Made of 50 percent wool and 50 percent silk, it hugs the natural shape of my shoulders. For trads who prize shoulder and lapel width above button stance (this is a two, not three) and the dart issue (darts are present), you’ll probably want to check these out.

You’ll also want to do it in person, and here’s why. 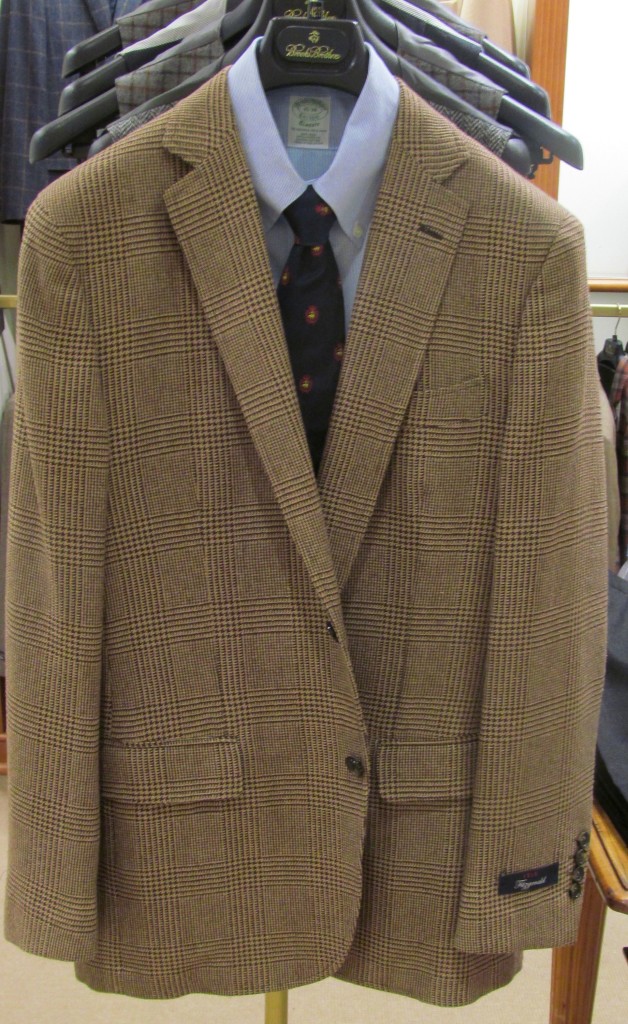 I went home planning to bang out a blog post, but when I looked up the jacket on the Brooks Brothers website, it wasn’t very flattering. Beyond the unattractive outfit, the way the jacket fits the model is nothing like how it fits me. My two Fitzgeralds at home, along with the one in the store, are of standard length, which means a measurement of about 31 inches from the bottom of the collar for a regular, and 32 for a long. The model is clearly wearing a short when he should be in at least a regular: 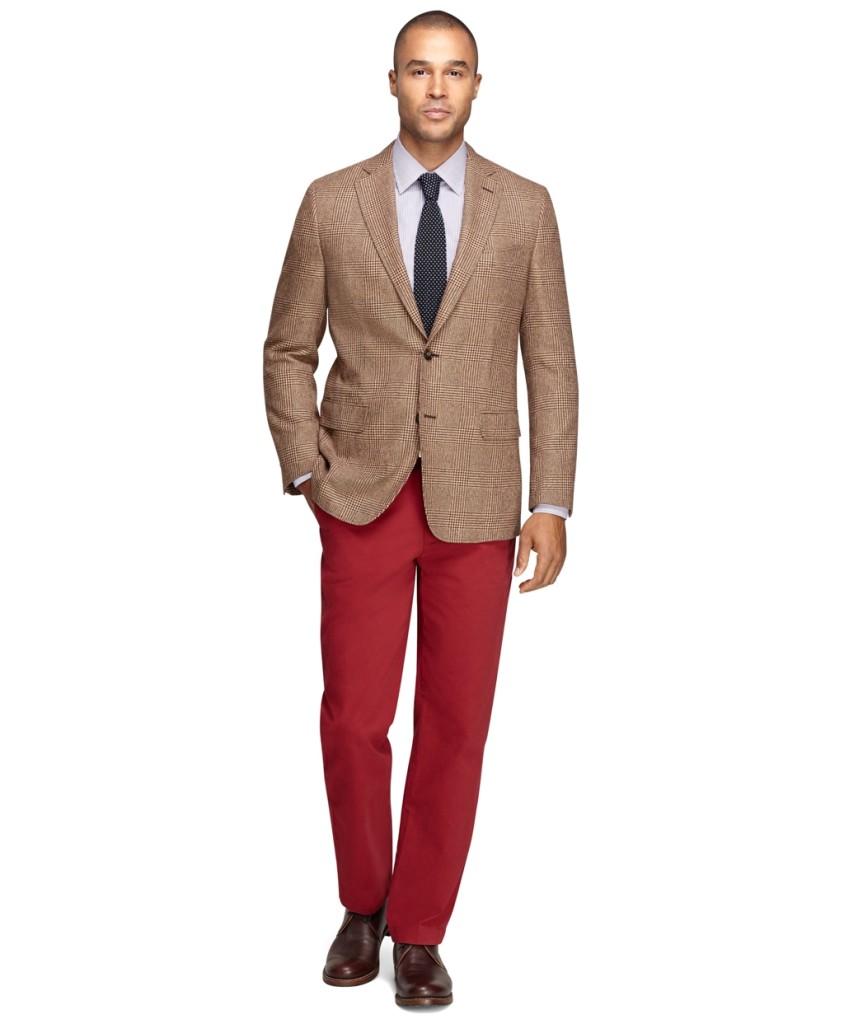 In addition, the product description says that the jacket is distinguished by a shorter length, while I don’t believe that it is in fact the case, and yet that’s certainly how it looks on the model. This suggests that consumers are being fed very confusing information as to how Brooks jackets fit. Men who want a traditional length may see catalog and web photos and assume the jackets are cut very short, and not even bother to try them on in person. In fact, it seems plainly clear that what we’ve assumed all along — that models are being given jackets that are deliberately short for them — is indeed the case.

The view of the back of the jacket is even more troubling. I don’t know what that pinching is at the waist, because that’s certainly not how it fit me. Was the model pinched with clothes-pins for the front shot, and when they were removed for the rear shot, this was the result?

Also note that while the description does indicate that the jacket is single-vented, the photo could confuse some shoppers as to whether they should believe the words or the image. The photo above makes the jacket look unvented. The one I tried on indeed had a stitch closing the single vent, as you often find. Was this stitch not removed from the jacket for the photo shoot? While a single vent should certainly fall straight and not open, it seems like there would be some shadowing visible, but this photo looks like the vent is still sewn shut.

Finally, the website copy contains one genuine error, describing the jacket has having functional buttonholes on the sleveves. It does not. It has faux functional buttonholes, which is to say that annoying stitching meant to simulate working cuffs. Most jackets come from the factory with sleeves that are extra long, and most men who are serious about clothing — the kind who spend $800 on jackets — have their sleeves shortened to show shirt cuff. Faux stitches often make this impossible. Fortunately, this jacket’s sleeves are not terribly long (perhaps owing to the higher armhole); a regular length would require no sleeve shortening for me personally, while a long would require just a touch, not enough to reach up to the faux stitches and look bad. But that doesn’t change the fact that the product copy is inaccurate.

I had to hold off on the blog post and go back the following day with my camera to try and get a better shot. When I told the salesman what I was up to, saying that the jacket didn’t look very good on the website, he rolled his eyes in apparent agreement.

Three cheers to Brooks for introducing these soft-tailored jackets, which lovers of unpadded shoulders will appreciate. The jacket was one of the most comfortable I’ve ever worn, and I’m glad to no longer be unaware of them. I just hope the folks at Brooks aren’t comfortably unaware of how their merchandise is presented on their website. — CC 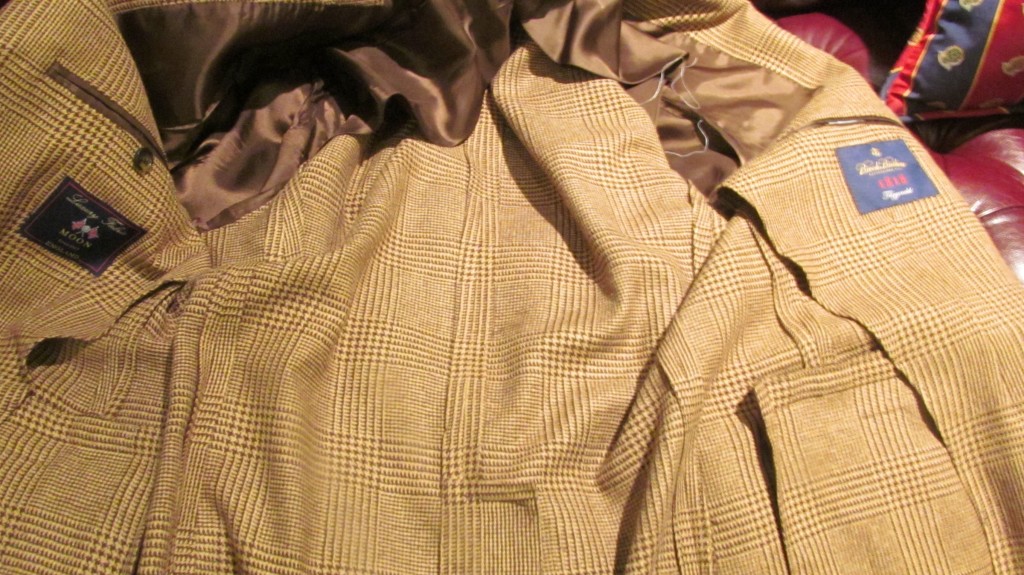